Who was Jakob Lorber? 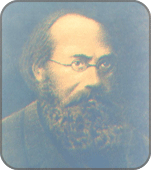 Jakob Lorber was born on July 22, 1800, on the left bank of the River Drau amidst vineyards, in the Village of Kanischa and parish of Jahring, where his father, Michael Lorber, labored on a small farm.
It was not mere coincidence that Jakob Lorber grew up in an impoverished rural environment, though in a home open to art and religion. He inherited from his father his many-sided musical talents, receiving instruction on the violin, piano, and organ.
By the time he attended the gymnasium (high school) in Marburg, Lorber had earned the necessary tuition money as an organist at one of the local churches. He received his accreditation as a high school teacher in 1829, in Graz, Austria, capital of the province of Steiermark. At that time, however, he could not find appropriate employment. This prompted him to continue his musical studies, which consisted of composing, teaching the violin, providing singing lesson, and giving an occasional concert.
During these years, Jakob Lorber followed his inclination and immersed himself more deeply in the spiritual "Path to the Innermost." He read, among others, the writings of Justinus Kerner, Jung-Stilling, Swedenborg, Jakob Böhme, and Johann Tennhardt. The Bible, however, was his constant companion and remained his principal source of inspiration until the end of his life.
Despite his many abilities, he lived from hand to mouth, until he was finally offered a position as conductor of the Opera in Trieste. It was just as he was about to accept this position that he received his appointment as "God's scribe." On March 15, 1840, right after early morning prayer, he heard a voice in his heart which very clearly ordered him: "Get up, take your pen and write!"
He abandoned all travel preparations, and obediently sat down to write what the mysterious voice dictated. It proved to be the introduction to his first work, The Household of God (Die Haushaltung Gottes): "And thus the good Lord speaks to everyone; and this is true, faithful, and certain. Whosoever wishes to speak to Me should come to Me, and I will place the answer in his heart. But only the pure, whose hearts are full of humility, will hear the sound of My voice. And whosoever prefers Me to all things and to the world, and loves Me like a bride loves her groom, with such a person I will walk arm in arm. Such a human being will for all times look upon Me as one brother would look upon another, which is how I have looked upon him from eternity, before he existed."
From the hour of this first dictation by the Lord, the unexpected and unheard powerfully entered Jakob Lorber's life. During the twenty-four years that followed, he wrote almost daily for many hours without interruption, neither consulting any books of reference nor otherwise having any prior experience of the voluminous knowledge which flowed from his pen through the Inner Word. His life was fulfilled solely in obedience to this Inner Voice.
One would have to speak entirely in superlatives in order to capture the essence of Jakob Lorber. If we consider him as a literary man, then he surpasses all other authors, poets, and thinkers throughout history. Where else can one find such comprehensive wisdom B interpretations of such depths, or such accurate knowledge of geography, history, biology and natural science, even unto the creation of the cosmos? His major works fill twenty-five volumes of 500 pages each, not counting his other smaller volumes. And if we consider him as a mystical genius, he surpasses all other initiates of whom we have knowledge. No words can encompass him; and if he called himself "God's scribe," that was only his own humble self-assessment.
Jakob Lorber died on August 24, 1864. His mission was accomplished, and he had foreseen his own death. On his tombstone at St. Leonhard Cemetery in Graz, the apostle Paul's words are written: "Whether we live therefore, or die, we are the Lord's."


Results of his work


Who was Gottfried Mayerhofer?

Gottfried Mayerhofer, who, apart from "Lebensgeheimnisse", inspired by the inner spiritual voice, has written several other works published by the Lorber-Verlag, Bietigheim, was born in Munich in 1807 as the descendant of a notable family. In his middle years he entered as officer into Greek royal service, married in Athens the daughter of a wholesale merchant and later lived in Trieste in good circumstances. There he came into contact with the writings of the New Revelation through Jakob Lorber and became an enthusiastic follower of the same. Through his selfless financial help, he helped the then publisher Johannes Busch in the publication of "The Great Gospel of John" and other Lorber works.
At an advanced age, Gottfried Mayerhofer himself, as a diligent disciple of the Lord, received the gift of the Inner Word. Thus through his writing several works originated, in which many questions relating to creation, to life, to the road to salvation and to communication with the spiritual world etc. were discussed. The most important and most beautiful fruit Gottfried Mayerhofer was allowed to offer mankind is the unique collection of 53 sermons by the Lord called "The Lord's Sermons", a work which serves many people all over the world for their daily edification.
On Good Friday 1877, Gottfried Mayerhofer was allowed to return to the lightful spirit-world about which he had given us so much information.


Results of his work